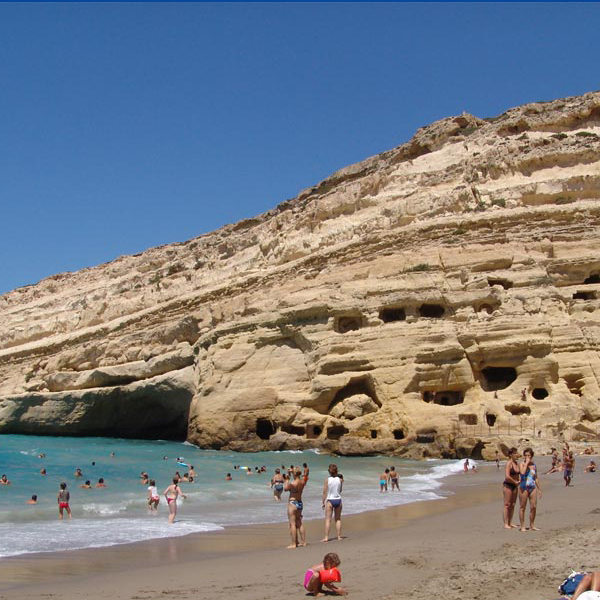 Matala was the ancient port of Phaistos and Gortys and a former fishing community which has developed into a modern holiday center. It is located 4 km south-west of the village of Pitsidia and 75 km from Heraklion. It is built on the coast line of the Messara bay inside a small and picturesque inlet.

The turquoise blue sea, and the red disk of the sun which sets in the evening horizon create a hue of colors that evoke novel emotions. Visit this unique destination using our excellent service with 1way car rental.

Matala was the port of Phaistos during the Minoan period, following the destruction of Kommos, and the port of Gortys during the Roman period when Gortys was proclaimed capital of Crete by the Romans. The Gortynians occupied Matala at 220 B.C.

There is also a cave known as “Brutospeliana” and legend has it that it was frequented by the Roman general Brutus.

Owing to its exceptional natural beauty, Matala became the meeting place of the “Flower Children” in 1968. Although their conference failed to realize, yet they were compensated by the incomparable beauty of the area, which so much contrasts the concept of destruction and war. Canadian folk singer Joni Mitchell‘s experiences with the Matala hippies were immortalised in her 1971 song Carey.

The magnificent inlet of Matala features one of the best beaches in Crete. The artificial caves, carved into the north face of the coast, have been probably used as prehistoric dwellings and places of worship, while during the 1st-2nd century were used as tombs.

These caves, in combination with the sandy beach, form a semicircle on both sides of which jut up towering rocks; they act as a magnet for many people. During the 60’s the caves were hosting a hippie commune. Today, the tomb-caves of Matala are protected by the Archaeological Service.

The “Koule” fortress on the Kastri hill is an attraction that should not be missed by the visitor.

There is also a hewn-in-the-rock church dedicated to the Annunciation of the Virgin Mary. It is more like a catacomb and was used by the early-Christians during the years of persecutions.

South of Matala there is a huge rock formation known as the rock of “Theosyni” that offers a panoramic view of the Messara Bay. The rock rises from the sea while at sea level it caves in deep to form a natural marine cave, named “Kouroupi”. This cave provides shelter to wild pigeons and to the Mediterranean seal.

The beauty of the coast continues south of “Kouroupi”, where following a path along the rock, you reach the enchanting “red sand” beach, a place for those who are young and daring. The spectacular red sand beach is known as “Ammoudia”. To get there take the sandy trail from “Kouroupi” that leads south. This location is ideal for camping.

Matala is a village located 75 km south-west of Heraklion, Crete. It is part of the community of Pitsidia within the municipal unit of Festos,Heraklion regional unit.