The island of Crete

Crete, one of the most popular islands in the world and the largest one in Greece, is separated in four regions.

Heraklion, one of the largest cities in Greece and a very important point of contact in Crete, welcomes you. Heraklion is located among two imposing mountains - Psiloritis on the west and Dikti on the east. The city of Heraklion has been the largest centre of civilization on Crete since the Minoan times. Venetian constructions, such as the Koules Fortress (Rocca al Mare), the ramparts and the arsenal, are dominant at the port of the city. Also you can find several sculptures, statues and busts commemorating significant events and figures of the city’s and island’s history, such as El Greco, Vitsentzos Kornaros, Nikos Kazantzakis and Eleftherios Venizelos. In addition, many fountains of the Venetian era are preserved with the most famous one, called Krini Morosini, found in the Lions Square. During your holidays in Heraklion, you can combine wellness and relaxation, sandy beaches and delicious food with extreme sports and a great nightlife. There are so many places to visit, exploring the hidden beauty of the old city and the traditional villages that are around.

You can travel to Heraklion by plane, via International Airport Nikos Kazantzakis, by sea or by car.

Whatever you choose, Heraklion is waiting to amaze you! 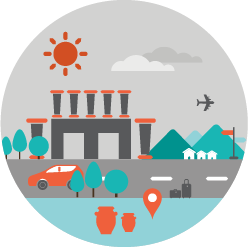 Rethymno combines rare features: the old town’s charm and history, with long sandy beaches and summer parties for all. Rethymnon has been greatly influenced by the Venetian and Ottoman times, allowing you to enjoy the unique character of the old city, a harmonious combination of architectural and historical cultural influences ranging from the Venetian to the Ottoman Empire. Do not miss the exotic beaches that are in Rethymno. You have to be very careful, though, especially in summer, with some other, smaller but very important visitors - the turtles. Turtles are regular visitors along the beaches of Rethymno and return between June and August each year to lay their eggs. You can reach Rethymno by ferry or by driving. The harbor is close to the centre of the Old Town, where all the restaurants and cafes are around, too. You may enjoy your meal or drink there, fascinated by the magical atmosphere of the place. There are also, lots of shops for souvenirs and with many local products now available . With no doubt the old and the modern combination makes a colourful and romantic town.

One extra tip that you have to keep in mind is… to explore the countryside. Take the chance and spend some days in Rethymno visiting incredible sites, gorges, monasteries, traditional villages with ancient churches as well as the spectacular mountain of Psiloritis. 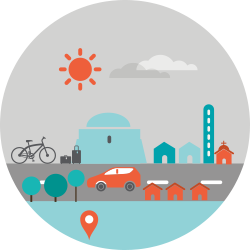 Lasithi is the easternmost part of the island of Crete and is about 70 km. east from Heraklion… Its capital is Agios Nikolaos, but it includes very popular places, such as Ierapetra, Neapoli and Sitia. In addition, in Lasithi you will find some of the most popular holiday resorts worldwide, like Elounda. A place that you should not forget is the beach of Trypiti kai the palm beach of Vai. Keep in mind to combine your vacation here with a tour of the small island of Spinalonga or Kalidon, which is popularly known as “the island of the lepers”.
Lasithi is also known for its rich subsoil and the ideal climate for horticulture , which has pushed many young people to engage in agriculture. You can buy so many goods of Cretan land by local farmers but also take part in lots of festivals in the area, such as the famous “potato festival”, with traditional cretan music and food. 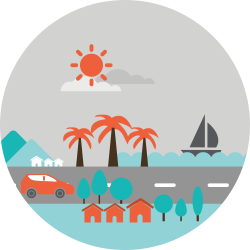 Chania is a place with great history and spectacular monuments. The city of Chania, located about 60 km west of Rethymno, has had a tremendous history since the Minoan times.It is noteworthy that Eleftherios Venizelos (1864–1936), a major political figure of the 20th century European scene, was born in Chania and became the leader of the 1896-97 uprising against Ottoman rule. He was Prime Minister of Greece and was, undoubtedly, a great statesman. His tomb is on the hill of Profitis Ilias, about 5km east from the city centre of Chania. Do not miss the chance to walk along the old town as well as visit some of the most important museums in the city, such as the Archaeological Museum, the Folklore Museum (Old Town), the Historical Archive (the second most important in Greece), the Nautical Museum of Crete (Old Town) and of course, the house of E. Venizelos. If you love theatre, you can also enjoy shows and performances from several theatre groups, the most important being the Municipal and Regional Theatre of Crete (DI.PE.THE.K), as well as a number of traditional musicians, ready to take you on a musical journey.

You can reach Chania either by air, via International Airport Ioannis Daskalogiannis, or by boat/ferry. Also, you can ensure an excellent drive and services by choosing one of the vehicles of 1way car fleet. 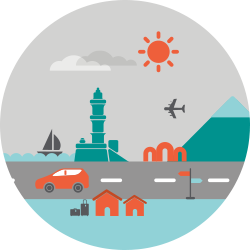 Visit our Blog for more