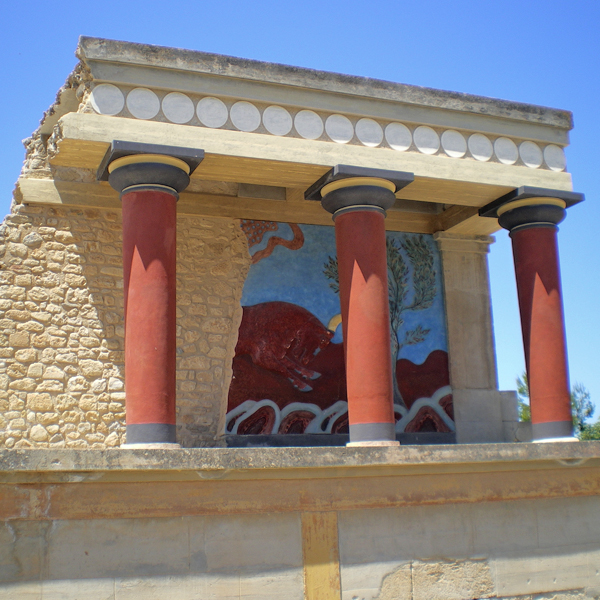 The archaeological site of Knossos is one of the most important Cretan monuments. There is evidence that this location was inhabited during the Neolithic Period (6000 B.C.). On the ruins of the neolithic settlement the first Minoan Palace was built (1900 B.C.), where the dynasty of Minos ruled.

This was destroyed in 1700 B.C and a new palace was built in its place. The Palace covered an area of 22,000 sq.m, it was multi- storeyed and had an intricate plan. Due to this fact the Palace is associated with thrilling legends, such as the myth of the Labyrinth with the Minotaur.

Between 1700-1450 BC, the Minoan civilization was at its peak and Knossos was the most important city-state. During thοse years the city was destroyed twice by earthquakes (1600 BC, 1450 BC) and was rebuilt.

The city of Knossos had 100.000 citizens and it continued to be an important city-state until the early Byzantine period. The site was discovered in 1878 by Minos Kalokairinos. The excavations in Knossos began in 1900 A.D. by the English archaeologist Sir Arthur Evans (1851- 1941) and his team, and continued for 35 years.

Knossos is located about 5 km south east of the centre of Heraklion and lies on the road to Archanes.

It is the largest of the preserved Minoan palatial centres. Four wings are arranged around a central courtyard, containing the royal quarters, workshops, shrines, storerooms, repositories, the throne room and banquet halls. It dates back to 2000-1350 B.C.

It is located west of the Great Palace and is the second biggest building of Knossos. In one of its chambers the wonderful Bull’s Head, made of steatite, was found, which is exhibited in the Archaeological Museum of Heraklion.

It is located northeast of the Great Palace and it is considered part of it. A magnificent jar was found here.

The House of the High Priest.

This building is considered to be the House of the High Priest due to the stone altar that was found here. The altar is surrounded with double axes stands.

It is located opposite the Great Palace and it was the official entrance to the palace. It served as public baths with running water, where the traveller or visitor of Knossos should bathe before visiting the King.

It is located south of the Palace and it is considered to have belonged to one of the last Minoan Kings.

Enjoy this unique experience and make a carefree trip with one of our latest car models! In 1way we are devoted to making your time in Crete unforgettable. Please do not hesitate to contact us and check out our special offers.